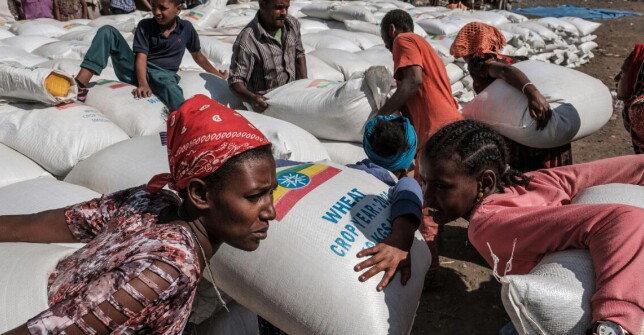 Humanitarian agencies have stopped operations in an area of Ethiopia’s stricken Tigray region where a deadly air bombardment hit internally displaced people’s camp by the country’s 14 years crisis, the UN stated on Sunday.

The ugly attack came just few hours after the Ethiopian government had announced a call for “national reconciliation” and commenced renewed appeals from an alarmed international community for an end to the bloody war bedevilling the country.

The United Nations Office for the Coordination of Humanitarian Affairs (OCHA) said in a statement to AFP that the Friday midnight raid in the town of Dedebit in Northwestern Tigray had “caused scores of civilian casualties including deaths,” according to sources.

Reports said, “Humanitarian partners suspended activities in the area due to the ongoing threats of drone strikes.”

The rebel group, Tigray People’s Liberation Front (TPLF) said the attack had claimed 56 lives, while an official at the region’s main hospital in the capital Mekele reported 55 dead and 126 wounded persons.

Getachew Reday, TPLF spokesman also claimed in a Twitter posted on Sunday that the Eritrean military had launched attacks against its fighters in Northwestern Tigray on Saturday.

The militia group leader, accused Eritrea of seeking to “sabotage any & all peacemaking efforts in the region ostensibly to protect ‘Ethiopia’s unity’.”

It was not possible to independently verify the various claims because there is no access to the region since there are restrictions and it remains under a communications blackout.

Ethiopian government officials, however, have refused to comment on the attack.

Eritrean military forces have fought in support of Ethiopian government forces against the TPLF and been accused of committing atrocities including rapes and massacres in Tigray.

OCHA said the lack of essential supplies, especially medical supplies and fuel, was “severely disrupting the response to the injured, and (has) led to the nearly total collapse of the health system in Tigray.

“The intensification of air strikes is alarming, and we once again remind all parties to the conflict to respect their obligations under international humanitarian law.”

The war between forces loyal to Prime Minister Abiy Ahmed and the TPLF has led to the gruesome murder of thousands of people and forced several million to flee their homes.

Tigray itself is under what the UN calls a de facto blockade that is preventing life-saving food and medicine from reaching its six million people, including hundreds of thousands in famine-like conditions.

UN spokesman on Ethiopia, Kenneth Roth (@KenRoth), said on Twitter, “No trucks carrying humanitarian supplies have been able to enter Tigray since 15 December 2021. To recap, since 12 July 2021, only 1,338 trucks have entered Tigray, which is less than 12 per cent of the trucks we need to get in.”

Doctors at the Ayder Referral Hospital earlier this month issued a statement painting a bleak picture of desperation, saying patients including children were needlessly dying because of the blockade.

The Dedebit strike came the same day that the Ethiopian government announced an amnesty for several senior TPLF figures and other high-profile opposition leaders in what it said was a bid to foster national dialogue and “unity”.

The amnesty has been welcomed by the international community as a possible way out of the fighting, which has threatened to tear apart Africa’s second-most populous country.

It followed a dramatic turnaround in fortunes on the battlefield, with the rebels retreating to their Tigray stronghold at the end of December in the face of a military offensive that saw government forces retake a string of strategic towns.

The rebels have accused the government of continuing to conduct deadly drone attacks on Tigray despite their pullback.

OCHA reported last month that dozens of civilians were reportedly killed in the last days of December in a barrage of air raids in Tigray.

United Nations reported this week that three Eritrean refugees including two children had been killed in a Wednesday air force bombardment on a refugee camp in Tigray.

The US Bureau of African Affairs through Twitter, has described the attacks as “unacceptable.”

“We redouble our call for an immediate end to hostilities, the prompt launch of an inclusive national dialogue, and unhindered access so aid can reach all Ethiopian communities in need.”