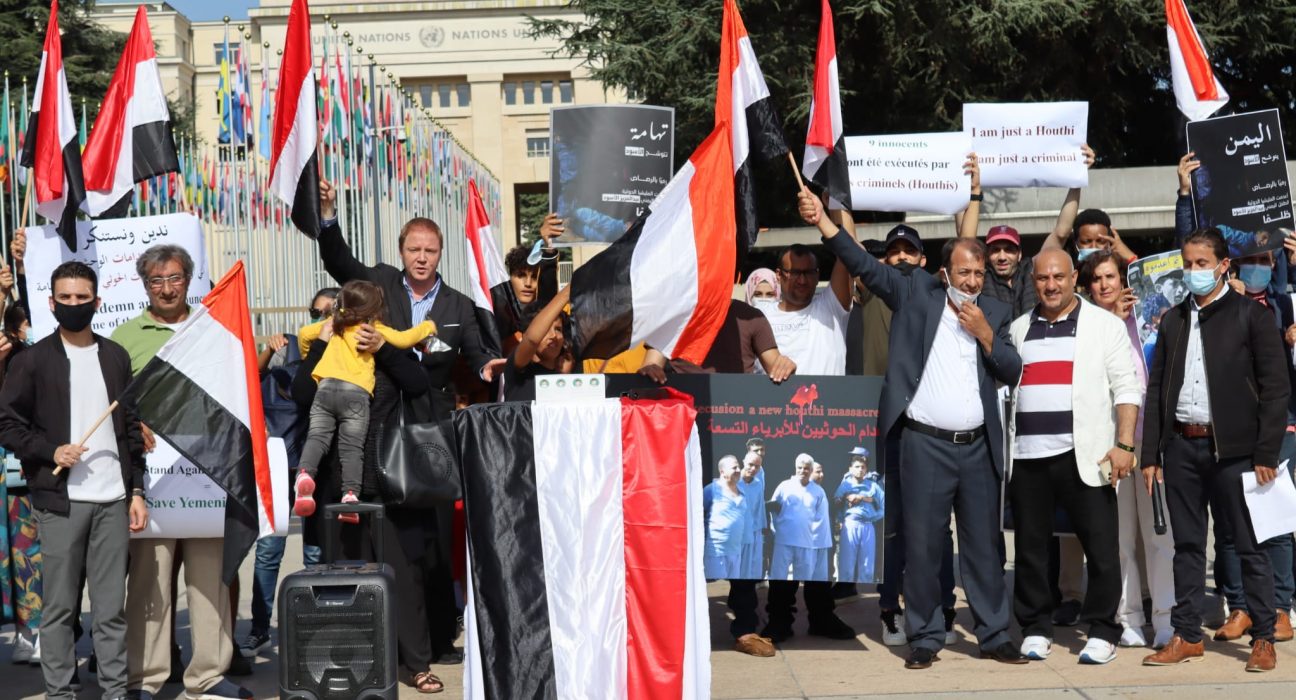 This event, organized by the Yemeni Coalition of Independent Women and allied organizations for Yemen freedom, happened in parallel of various seminars, conferences and panel discussions aimed at exposing the ongoing destruction of Yemeni civil society since the coup and takeover of the legitimate Yemeni government by Iran-backed Houthi militia in 2014.

The protest was held on the sidelines of the 48th Session of the United Nations Human Rights Council being held in Geneva, Switzerland, and organized and hosted by the European Organizations Union for Peace in Yemen — and the Yemeni Coalition of Independent Women — which is headed by its President, Dr. Wesam Basindowa.

“Today we’ve gathered to commemorate the brutal extrajudicial execution of nine innocent Yemenis, including a teenager, who had been massacred by the Iran-backed terrorist Houthi militias after being arrested on trumped-up charges, being held incommunicado for three years and essentially disappeared, after being denied their due process rights and the basics of a fair judicial process, and after brutal torture which left the child detainee paralyzed and unable to stand in the video of this unconscionable incident,” said Irina Tsukerman, a human rights lawyer and editor-in-chief of The Washington Outsider.

Tsukerman said the silence from international media, human rights NGOs, and the international community at large regarding this incident is “deafening and disgraceful.”

Abdul Aziz Ali Al-Aswad was 17 when he took his last breath before being executed by firing squad, along with eight others. He was arrested over three years ago after being accused of treason and of helping to reveal the location of al-Sammad, who was killed in an air strike in 2018.

Several protesters held up signs with slogans in different languages to protest the Houthis and their ruthless murders.

“Where are the human rights for these people?” asked Andy Vermaut, a human rights defender. “We cannot exist in a country where innocent people are victims of the Houthi mentality and terrorism. What separates the Houthis from the Islamic State?”

At numerous moments during his intervention, Vermaut chanted the name of Abdul-Malik al-Houthi, the leader of the Houthi movement, to which the crowd reacted with, “shame on you!”

Vermaut said, “The Houthis have once again shone their true face to humanity. They show the world how barbarians are destroying Yemen. This is not justice,” he said. “It’s the intentional murder of real innocent people. Today, we are to remember Abdul Aziz Al-Aswat” — the executed minor. “Because he had no war with his family. He had a war with his friends. Nevertheless, he came back in a body bag.”

To honor the memory of the victims of the Houthi regime, Vermaut asked for those gathered to observe one minute of silence.

A seminar on Houthi violations in Ma’rib, a military escalation against civilians